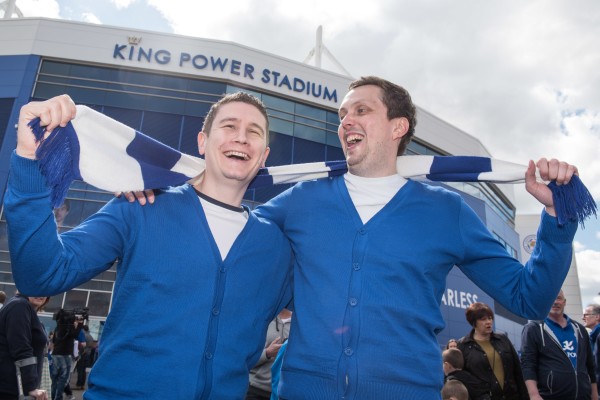 In the latest tribute to the goal scoring exploits of Leicester City and England striker Jamie Vardy, Leicestershire-based George at Asda has created the unique ‘Vardy Cardy’ – a blue V-necked cardigan.

George is the clothing division and the fashion brand of national supermarket chain Asda, and is one of the biggest employers in the East Midlands, based just south of the Leicester in Lutterworth and employing over 500 colleagues.

The creation came about after colleagues at George wanted to come up with their own take on celebrating the surprise success of their local football team – and creating something ‘snazz-cas’ (snazzy and casual) that they could wear to the match.

Dan Pole aged 31 and from the Wigston area of Leicester, is the man behind the idea and works with the clothing designers and buying teams at George – and is a lifelong Foxes fan that went to his first game with his uncle and dad at Filbert Street in the late 80’s.

Dan explains: “There’s a massive buzz all over the city and it’s even noticeable in workplaces.

“Everyone is so proud and we wanted to come up with our own tribute.

“It’s a bit of a laugh and I’m sure Jamie Vardy would like the sentiment behind it – this season has been beyond our wildest dreams and we just want them to know everyone inthe city is behind them.

“If we never do anything again in the history of football, but win the league this year, that’s good enough for me.”

Dan and his Foxes supporting friends have now taken to wearing the garment to the match – and the local lads, who have been friends since school, have even made up their own ditty “Jamie Vardy’s Cardy Army”.

Dan added: “At first we only had a couple but then everyone wanted one because they think they look proper smart – I’ve had to had a few extra made, because we are off up to Manchester for the United match and wanted to look the business – plus it can be a bit nippy up North!

“We’re in the Champions League next year, so you never know we might end up wearing these abroad and impressing the locals in the likes of Paris and Milan!”

George at Asda launches brand new collaboration with Netflix
George at Asda has collaborated with Netflix, to offer fashion and lifestyle products for the whole family.The partnership launched this week in selected stores and online at George.com, with branded items including footwear, accessories, stationery, mugs and boardgames available for fans of Netflix’s original series, including Squid Games,…

Sustainability
Ready, get-set, Gucci… George at Asda goes Gaga for exclusive drop of designer pieces
Pre Loved VintageAhead of the highly anticipated release of Ridley Scott’s House of Gucci this Friday, George at Asda have hidden a host of preloved designer garms across their stores for customers’ purchasing pleasure.The catch? No one knows where to find them.Instead, the retailer is challenging customers up and down the country to seek out a…

George Fashion
Asda announces Liz Evans as new Managing Director of George
Asda has today announced that Liz Evans will join the business in January 2022 to lead its George business – the UK’s second largest fashion retailer by volume.Liz joins from family lifestyle brand Fat Face, where she has led the business as CEO since 2019. Prior to joining Fat Face, Liz was the CEO of well-known fashion brands Oasis, Warehouse…