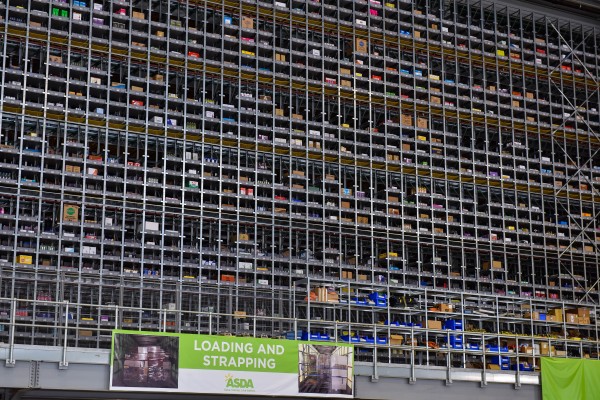 His Royal Highness, Prince Andrew, made an official visit to the world’s first Automated Retail Distribution Centre to see the cutting edge technology at the new £100 million Asda facility in Warrington.

HRH was shown around the distribution centre, which is a major investment into the UK retail market by parent company Walmart, by the site manager Tom James, alongside Asda’s Deputy CEO and Chief Operating Officer, Roger Burnley.

Tom and Roger lead the tour, in which the Prince was looking to learn about how automation is becoming a major part of retail and also what benefits the centre has to the business and the local area.

The warehouse is 97% automated and sees 600 colleagues work alongside robotic technology to process around four million cases per week, serving 140 Asda stores across the North of England and beyond.

The technology ensures that Asda stores in the North West are receiving the correct amount of product for the 18 million customers that visit stores each week, with 100% accuracy.

The automated nature of the facility means that it is also one of the most ergonomically friendly distribution centres in Europe, as colleagues have standing work stations and are assisted by robots and 4.5km of conveyer belts.

The new facility puts Asda and the North of England at the forefront of retail distribution innovation and is set to vastly improve retail productivity and efficiency. At optimum capacity, the site can process 4.9 million cases and up to 8000 lines of product, which makes it the biggest distribution centre in Europe.

Walmart is closely monitoring the operation, with future plans to replicate similar facilities across its vast operations in North America, with the potential to improve efficiency across its US estate by learning from the Warrington site.

It features nine state-of-the-art robotic cranes, which each control 27,000 individual pallet locations and are all able to lift pallets as high as 27 meters, which is higher than any fork lift truck currently can do.

Located on the site of a former World War Two American air base at Burtonwood, the warehouse has a one million square foot capacity because of the unique way its robots can access stock.

The strategic location of the site was selected due to its close proximity to Liverpool’s deep sea port, Manchester Airport and the local rail and motorway networks, which enable direct and efficient delivery and receipt of goods.

Colleagues at the new Asda Warrington Automated Distribution are trained to use and work with the hi-tech machinery. Two colleagues at the new site are Mary Winstanley and Kate Veregan, who explained to the Duke that the centre can receive up to 3000 pallets of product each day, which is split up and sent to different stores across the north of England through 250 delivery drivers.

Roger Burnley, Deputy CEO and Chief Operating Officer at Asda, said: “Our Warrington site really is impressive. Our colleagues do a fantastic job to ensure the depot works at its maximum efficiency to send product to stores across the North of England.

“His Royal Highness was genuinely interested in how the operation works, and was impressed at the innovations we're pioneering at Warrington. It was great to be recognised for our state of the art technology, which ultimately provides Asda customers with a better shopping experience.”

Tom James, Warrington Depot General Manager, said: “It isn’t often you get a visit from Royalty, but it was extremely exciting to be able to meet his Royal Highness Prince Andrew and show him around our Depot in Warrington. I have walked the tour route a thousand times but I still enjoy seeing the amazement on visitors faces as they walk around, especially when its royalty!”

Party for two: Asda announces 3-Course Valentine’s Day Meal Deal for just £15, including wine!
This year Asda is pulling out all the stops for those looking to celebrate love with its Valentine’s Day Meal Deal, which includes a starter, main, two sides, dessert, and wine or chocolates for only £15. The deal features 17 all-new options, plus returning favourites and vegan offerings across all courses of the meal - including wine.For…