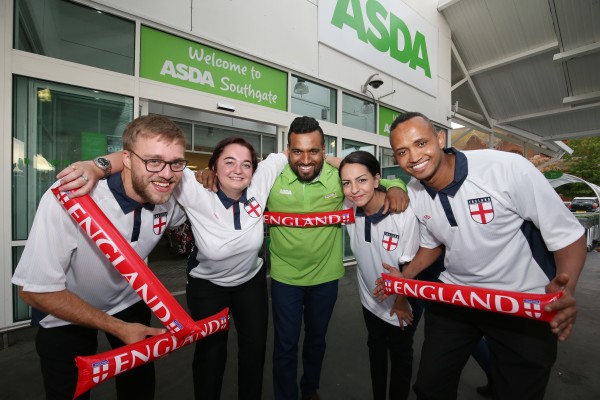 Asda has launched operation ‘It’s Coming Home’ from its London “Southgate” store in time for England’s semi-final against Croatia..

Operation ‘It’s Coming Home’ means Asda colleagues at all stores who want time off for the most anticipated match in years can work with their local store to make a substitution, with a shift swap. The plan also includes showing the game in colleague areas at all stores and letting those on shift wear their World Cup shirts.

Asda is expecting that sales of bangers, burgers and BBQ’s are to increase by 1966% in the next 4 days. 8.5 Million sausages and more than 1 million KG of charcoal is set to be sold as Brits prepare for the match the best way they know how to.

During the World Cup Asda expects to sell over 3 million litres of beer – almost enough to fill the Olympic Pool from London 2012.

This Wednesday alone, Asda predicts beer sales of more than 750,000 large and mid-packs of beer and cider and 4.6 million cans and bottles of beer.

Throughout the World Cup, the retailer has already sold over 20,000 sets of George bunting and over 3,000 bandanas and whistles. England novelty hats, face paint and foam fingers are also flying off the shelves as fans go World Cup mad.

An Asda spokesperson said: “Operation ‘It’s Coming Home’ has been brewing for a while and following Saturdays heroics; it’s now in full swing.

Colleagues that want a substitute on their shifts are able to organise this with their store and extra bangers, burgers and booze are being delivered to stores in anticipation for a sales surge.”

Asda revamps refill proposition and guarantees cheaper prices
Asda has announced a new ‘refill price promise’ which guarantees that each refill product will be cheaper than packaged alternatives as part of its new refill proposition.The supermarket first introduced refill two years ago and has been continually testing and learning, working with customers to find what most appeals to them.Asda has partnered…

Control your-elf! Asda launches Elf-themed Cake Jar that costs £1.25 less than M&S’ version
As well as enjoying Asda’s new Christmas advert - featuring Will Ferrell as the iconic Buddy the Elf character – eagle-eyed shoppers have found new reasons to be merry this week as the supermarket has revealed four brand new, elf-themed bakery bargains.Asda customers have taken to social media to share the finds, in particular championing the…